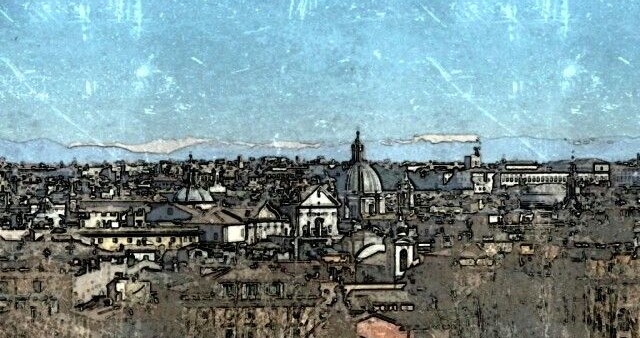 Here are 5 suggestions that Villa Pirandello sugests you savour in the eternal city at its best:   Small glasses keep best the aroma and flavour of this magic drink. Choosing a “maritozzo alla panna” as an accompaniment is a good option. It’s worth it! The most ancient market of the city is a joyful experience with colors, scents and flavours. Do not miss the spices!   Explore its oriental shops… Go into the villa and its gardens and look for the Magic Door (Porta Magica) adorned with latin symbols and inscriptions. According to the legend, these symbols represent the formula of the philosophycal stone.   Typical frozen dessert made of grated ice, sugar and fruit syrup.  Youcan find it at the kiosks along Lungotevere.   Have a look through the key hole of the Cavalieri di Malta’s doorway, inside the square of the same name,  An interesting surprise!

[…] The Door is situated on a corner in the square, between two weird statues which seem to be there as guardians. The main characteristics of the Door are some strange writings engraved on doorjamb and architrave. You can recognize some planet symbols, some latin writing and other mysterious symbols. It’s the Alchemic Door in Piazza Vittorio, in the heart of “chinese quarter”, in the first “villa-giardino” of Post Risorgimento Italy. In 1873, Villa Palombara, where originally the Door of Marchese Massimiliano Palombara was built, ruthlessly burned to the ground. And yet the door was disassembled piece by piece and rebuilt in the new Piazza Vittorio. On the pediment of the door you can immediately notice a latin writing saying: “There are three marvels: God and man, mother and virgin, triune and one.” The door has lots of symbols and mysterious inscriptions. And ever since they were engraved, in 1680, noboby was able to interpret them! And, at that time, a legend began circulating… It says that inside that laboratory, in 1680, an alchimist was able to obtain the philosopher’s stone, before disappearing into thin air! Fonte: http://www.esoterismoemisteri.com/la_porta_magica_di_piazza_vittorio_.html